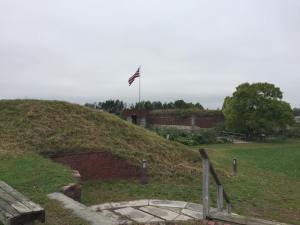 Next year will be the 240th year anniversary of the siege of Fort Mifflin in the Revolutionary War. The Fort, located just down the Delaware River from Philadelphia, held out for almost 6 weeks in the Fall of 1777 against the largest naval bombardment of the Revolutionary War although badly outnumbered and outgunned. The Fort’s fewer than 500 men, ordered to hold out “to the last extremity, but wifth only ten cannon, held out against a large fleet that at its high point delivered over 1,000 cannon shots in a single hour. This brave resistance gave Washington’s army the chance to get to Valley Forge after their disastrous defeat at the Battle of Brandywine. Even one of the British officers commented on the defenders saying,

“the behavior of the enemy did them honor, nor did they quit the place ’till their defenses were ruined, and the works rendered to rubbish, setting the works in a blaze when they could defend it no longer.”

Even with all the misadventures of the Continental Army, one has to wonder if somebody in the British army or admiralty had to at some point say, what were we thinking when we tried to seize the colonists muskets, cannon, and powder in Massachusetts? Who could have thought that trying to seize the arms of a free people would result in such a firestorm of resistance and rebellion? Obviously, they did not consider this in foresight. They must have been the Progressives of their day. Because they do not seem to understand this lesson.

With the ridiculous gun laws just passed in California and the bans in other progressive states like Connecticut and New York, one must wonder where the line will be drawn. Professional politicians repeatedly claim they aren’t “coming for the guns”. But then the President repeatedly cites Australia as an example of what should be done – and that is exactly what they did in Australia. Senator Feinstein of California said of “assault weapons” (in 1995):

“If I could have gotten 51 votes in the Senate of the United States for an outright ban, picking up every one of them, ‘Mr. and Mrs. America turn ‘em all in,’ I would have done it. I could not do that. The votes weren’t here.’”

This is all part of the traditional Progressive movement. It has been gunning for guns almost since its inception over a hundred years ago. Recently, a judge in California stated that he would like to see all guns gone, even from police and security. It is not that progressives do not understand the concept of individual rights. They just think that liberty is obsolete and that it stands in the way of “progress”. The erosion of the fundamental human right to defend oneself against both crime and tyranny will continue as both sides of the political equation in this country bring us progressive choices.

At some point, unless the trend is reversed, it may become necessary for Americans to once again resist “to the last extremity”. Hopefully this will not be the case. The fact that Connecticut gun owners have largely openly ignored the newest restrictive gun laws even to the point of showing up to protest armed with what are now “illegal” guns gives some hope. One can hope that a significant group of Californians do the same. Ultimately though, our fundamental rights are not subject to a vote. Should it come to confiscation, non-compliance and resistance will be the only moral option remaining. Don’t believe it? Neither did the British governor of Massachusetts when he initiated force to confiscate the people’s arms. I’m guessing that by Fort Mifflin’s brave defense, somebody on the British side was beginning to believe it.